Just Like That – V&A acquires the Tommy Cooper Collection

Great news that The Victoria and Albert Museum have acquired the Tommy Cooper Collection – the largest collection of its kind tracing the life and legacy of the much-loved British comedian Tommy Cooper (1921 – 1984). The museum already has a strong collection from British comedians – including Ronnie Barker, Tony Hancock, Dame Edna Everage and Morecambe and Wise.

The Tommy Cooper Collection comprises over 116 boxes of archive material and 24 props and posters to chart the career of the outwardly shambolic magician and comedian known for his trademark fez, flustered face, bungling stage persona and razor-sharp comedy. From his early career in the army to the height of his television stardom and status as national treasure, the collection also sheds light on Cooper’s scrupulously organised working methods, the business side of his vocation and the extent of his writing.

The collection includes Cooper’s ‘Gag File’ – an alphabetically ordered system for storing his jokes, stage props- including Cooper’s infamous ‘Head Twister’ illusion, posters; theatre programmes and merchandise charting his career spanning almost four decades. Of notable absence is Cooper’s red felt fez, a hat that became the comedian’s trademark. This sounds like a fascinating archive – I’m looking forward to seeing more of this when it goes on public display for the very first time in the V&A’s Theatre and Performance Galleries in the autumn. 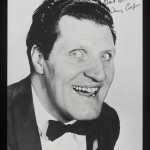 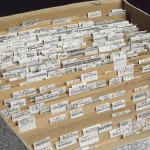 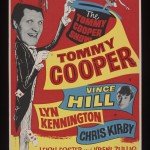